skip to main | skip to sidebar

When I winter camp I typically take more gear than I can haul on my back. This means that I have to tote it in 2 or more trips to my campsite. Pulk sleds are often used by arctic/antarctic travelers or the Ski Patrol.

Enter the Pulk sled. Rather than just using a rope to pull, Pulk sleds employ a rigid pole system that allows you to tow your gear without it hitting you when you go downhill.

Theoretically I should be able to get my gear to the campsite in only one trip.
Rather than purchasing a pricy, pre-made Pulk, do it yourself (DIY) and make one.

There are numerous considerations in designing your Pulk:
The best designs employ the KISS principle. To help with these design decisions, I've compiled a list of resources you could use:
Comment below if you come up with an awesome design or another online resource. Please don't hesitate to share your experiences with Pulka dancing.
Posted by Stephen Bunker at 8:19 AM No comments:

It's official! When the news started circulating that the two districts in Provo were joing to be realigned, we started thinking about our chapter name. With a mixed group of former Lakota and Sioux chapter members in the new district, and no real geographical tie to either name, we decided to take the name of Lagunas. The Lagunas were the local Utes who interacted with the earliest mormon settlers in Provo.

Don't expect the new name to mean a change in the way we do things though. We're still trying to put together the best opportunities for fun, service, and leadership for all of our arrowmen. We want you to have a bunch of great skills and ideas to take back to your units to make them even better.

Keep an eye on our new blog for more information about upcoming events like our camping promotion extravaganza in November and the movie and game overnighter at the Clyde Lodge in December.

Posted by gnupate at 1:46 PM No comments:

Sorry for the late announcement — I've been Hiking in the Uintahs for the last week.

Our chapter has big news: We just held elections and have a completely new Chapter Executive Board.

Please join me in wishing these fine young men well as they work together to guide the chapter over the next year.

Stephen Ferris is our outgoing lodge chief (in more ways than one, he just got his LDS church mission call to the Tacoma Washington Mission -- Good luck Stephen!) Before he turns over his position, I wanted to post this interview we did with him by email. 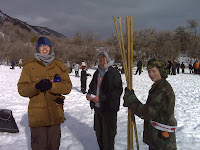 Stephen has been a great supporter of our chapter. He's come camping with us at Klondike and been to our Spring Ordeal, where he worked with the candidates to help clean up Camp Jeremiah Johnson.

Thanks Stephen for your support. We appreciate all you've done for us and for the Lodge.


When were you elected, and what have you done in the OA since then?

I was elected just before I turned 12 or 13. Since then, I originally became an active member of my Chapter's Ordeal Ceremony Team. At that point, I started becoming interested in leadership positions and was able to serve over Activities, Service, Ordeal Master (youth over the Ordeal), and Secretary. I often filled in for people that would assume responsibility, but would have troubles fulfilling them. I did run for Chapter Chief two times and was defeated both times. Never give up. On the Lodge, I have held the position of Secretary for two terms, and currently am serving as Chief. Again, never give up.
What are some of your favorite memories of your time in the Order?

There are so many wonderful memories that I have been able to have as I have served in these positions. I have loved getting to know people, especially knowing that, if it weren't for the positions I've held, I wouldn't have been able to meet and have gotten to know so many amazing people and had such great memories created through that.

I thoroughly enjoy camping, especially when you are at a Tepee Week and there are a bunch of white flakes falling all around you in the middle of June! Snow at Tepee Week, that was an unforgettable camp. We proved that, snow or shine, we were going to have fun, and we did.

I also have enjoyed the times where I have been able to gather around with the Lodge Executive Board (LEB) and make decisions that impact every member of our Lodge. I don't say this because we hold the fate of the Lodge in our hands, but rather, because you can truly see the love and concern that each member of the LEB has for everyone in our Lodge. A lot of thought, prayer, contemplation, hard work, and much more goes into every decision, great or small, that we make. It is an incredible thing to see and to know the love the LEB has for thier brothers in the the Tu-Cubin-Noonie Lodge and for the work they do.
What have been the most important lessons you've learned from the OA?

Brotherhood, Cheerfulness, Service. The three main points. This is what we are about. I have learned to make them a part of me. These three points are so powerful once understood and used correctly. It is amazing how they are all interwoven to the point that one of them being used will build upon the other two points. In other words, when excersizing one of these points, the others will be strengthened as well. There is more power in this organization, when used correctly, than most probably could ever imagine.

If a candidate were to come to you and ask if it was worth it to go through the Ordeal and become a member, what advice would you give him?

If you truly desire to spend yourself in the service of others, then yes, it is more than worth it. Two pieces of advice that I would give him:

Second, "He who serves his fellows, is of all his fellows greatest!".
Posted by gnupate at 9:40 AM 1 comment:

We had a great Ordeal down at Camp Jeremiah Johnson this weekend. Before things got started, the elangomats met together for a training session and to look over the camp and service projects we would be working on. We kicked things off for the whole group with a welcome dinner and spent some time playing games as clans before we started Ordeal itself.

22 candidates participated in the ordeal along with 8 elangomats and were inducted into the Order on Saturday evening. The arrowmen on site were able to do a lot of work and got the camp nearly ready for the wave of cub scouts that will pour over it this summer. After the Ordeal, we enjoyed a feast of stew, salad, rolls, Philmont peach cobbler, and ice cream with the arrowmen and their families..

It was also great to have our Lodge chief join us in service during the afternoon, and then to have him welcome our new members at the feast. Thanks for coming out Stephen.

I'd like to thank Steve Bunker and Bob Walsh who helped oversee the activity; the Ceremony Team from the Nez Pierce chapter for providing our ceremonies; Glen Westbroek, Greg Gibson, Larry Hall, Matt Hornback, and 'Woody' Woodward who all gave up part of their weekend to help recognize our newest members.

We owe a special thanks to Ann Shumway and KC Clark, the Camp Directors at Jeremiah Johnson, who were gracious enough to let us come out and hold our ordeal at their camp.

We can't wait to see all of Lakota arrowmen at our next activity, don't miss out on the food and fun.

Ok, since some folks have asked (and Mr B even dropped a comment about it), here's the recipe:

Then put the first bag into a second gallon sized bag (double-bagging keeps the dry ingredients from making too much of a mess).

About 1 hour before you're ready to cook the donuts, mix 1 1/4 cups water and 2 Tbs oil into the dry ingredients. Mix well. You can add up to 1/4 cup additional later if needed. The dough should be smooth, not sticky, and should be stretchy. Cover the dough and let it rise. You can leave it in the bags to rise or put it in a bowl.

Heat vegetable oil in a dutch oven. You need about 2 inches of oil to fry the donuts in. The oil is hot enough (350-400 deg) when a bit of dough dropped into it bubbles and floats.

Shape donuts (cut them, tear them, whatever works for you and your scouts), then fry them in the hot oil, turning occasionally. When they are golden brown, pull them out and let them drain/cool. Tossing them in cinnamon sugar or powdered sugar adds a nice touch.
Posted by gnupate at 10:58 AM No comments:

Four members of the Lakota chapter went to the Cascade District's Spring Camporee at Simpson Springs to camp as a chapter. Two more youth arrowmen were there with their units. We also found that we had seven adults members of the Order there — now we need to recruit them into the chapter.

While we were there, we had four goals:

Our chapter was the first unit on site. We split up, so that we could get our campsite set up and set up people at the entrance and the camping area to great incoming scout units and direct them to where they needed to be. It was good to see arrowmen serving the district like this. 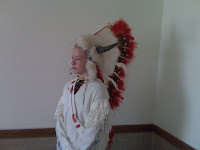 The call-out ceremony went very well. We had about a dozen candidates called out, and the rest of the scouts and scouters in attendance seemed impressed with the whole thing. The candidates and members portion of the ceremony was held in a blind draw out of sight of the rest of camp, and was a great introduction and invitation to the Ordeal (without violating its mystery). 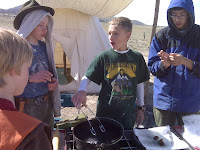 For the show and do, our chapter made donuts. It seemed like we had a pretty long line of scouts waiting to get a fresh donut. Hopefully, it showed everyon that there are some great breakfast options for a camp-out. I really enjoyed hearing the pro-OA buzz that it created among the other campers.

I think the best part of heading to the camporee as a chapter was just being able to hang out together. We had a good time camping out, and everyone enjoyed a 'quick' post-camporee run to the geode beds. (OK, so it was more like a half hour drive than a quick trip, but we all had fun anyway.)

Good luck to all of the candidates who were called out, we can't wait to see you at one of the upcoming ordeals. Maybe in the fall, you can be part of the call out team.

Are you on facebook? Join our facebook group and keep in touch with other members of the chapter

Which is your favorite UNPC summer camp?